Who gets to decide when the golf course can shut down?

Previous Next
Who gets to decide when the golf course can shut down? 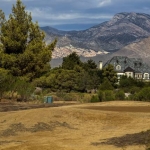 One consultant calls it “the golf course gold rush.”

Operating a resource-draining business frequented by an aging customer demographic is becoming less attractive for golf course owners. Meanwhile, large swaths of open land in urban and suburban cities with growing populations are becoming more difficult to find. As a result, golf course owners and developers are jumping on opportunities to convert 18-hole green paradises into residential housing and other lucrative businesses.

That is great news for land owners and developers, but it presents a problem for residents living near shuttered golf courses. It’s a conflict Southern Nevada is seeing played out across the valley — from the Badlands and Silverstone golf courses in Las Vegas to Legacy in Henderson.

“People come to think of it as a public fixture, a permanent part of the landscape, a park-like setting,” says George Garcia, president of the land planning and development services firm G.C. Garcia, which has been working with the frustrated residents living near Badlands. “The expectation is, ‘I paid a premium for living on a golf course.’ They clearly believed it would never be anything else.”

Stemming from that tension are factors specific to each golf course. There are zoning codes, deed restrictions and other regulations like those determined by master-planned communities. Then, there are more amorphous factors — quality-of-life changes and the uncertainty of home property values when a neighborhood changes. Litigation has occurred in all three aforementioned local cases.

Garcia likens it to a divorce.

“You have to divide up the property and kids,” he said. “You’re emotional. It’s expensive. You can make it harder or easier. Court isn’t the best solution. I think there must be a better way to evolve.”

Especially because the golf course conversion issue may not be at its peak yet.

“It’s not going away,” Garcia said.

New Las Vegas Ward 2 Councilman Steve Seroka agrees. The political newcomer defeated incumbent Bob Beers in a campaign almost solely focused on Badlands and upset constituents, primarily in the affluent Queensridge neighborhood. He sees a need for the City Council to take a bird’s-eye view on the issue.

“We have to find a balance between development, which is important, necessary and critical for a community such as ours, and the rights of homeowners who pay premiums to have that golf course property,” he said, adding that if Queensridge property values lowered, the impact would ripple beyond that neighborhood.

Dealing with each conversion on a case-by-case basis may be necessary, but Seroka says a more permanent solution is needed. In preparation for his first Badlands-related vote, during which he led the Council to a 4-3 vote to deny a proposed contract with the developer, Seroka researched other states and cities with golf-friendly weather that have tackled this issue.

Nationally, closures have exceeded golf course openings for the past 11 years. The majority have been public courses associated with residential housing.

According to Seroka, one Florida municipality went so far as to put a moratorium on golf course conversions until they could be handled more uniformly.

“I don’t know that we want a moratorium on anything,” he said. “But it’s important to have a transparent process that developers can understand and know the steps to — where residents understand what rights they have and what negotiating room they have.”

The Badlands case, Seroka lamented, set a precedent of drawn-out litigation and distrust.

“You’d prefer not to have that,” he said.

He is not alone. During discussion on the most recent Badlands vote, Mayor Carolyn Goodman made numerous disparaging comments about “meddlesome lawyers,” characterizing them and their legal proceedings as holding up progress and hurting everyone involved.

Seroka would like to see the City Council “eliminate the room for interpretation” on the development process. Some of the controversy surrounding Badlands has centered on whether proper procedures were taken by developers.

“Existing policies have been interpreted in different ways,” Seroka said. “That isn’t fair for either side. Let’s spell it out. That’s smart development. The ultimate test is what is best for the greater good of the community.”

He also sees implications beyond golf courses. Man-made water features, private parks or other types of open spaces could become equally valuable real estate in a city that someday will reach its limit in terms of expanding outward, and once neighborhoods give up their open spaces, they rarely get them back.

“I am not anti-development,” Seroka said. “I’m pro-smart development.”

The new councilman isn’t the only member of the City Council who thinks some additional measures might need to be taken.

Motivated by the shuttered Silverstone Golf Course in the far northwest, former state assemblywoman and recently elected Ward 6 Councilwoman Michele Fiore says she is considering going to Carson City during the next legislative session and advocating for a new statute that makes it “crystal clear” how the redevelopment of golf courses within residential neighborhoods is handled. Her inspiration comes from legislation passed two years ago in Texas.

“We just need to take the Silverstone CC&Rs and mimic it,” she said, referring to the covenants, conditions and regulations codified by HOAs and developers of master-planned communities. The Silverstone CC&Rs require 75 percent of homeowners — approximately 1,500 homes — to approve any redevelopment of the golf course. (The Texas legislation similarly requires 75 percent approval by existing lots or units within a development.)

That restriction hasn’t meant zero headaches for residents or the city, which recently approved $1.7 million of liens on the property because of issues related to maintenance and upkeep. And bankruptcy issues with owners of the company have complicated certain factors, says Garcia, who has been following the issue but is not directly involved.

Still, Fiore says the existence of the CC&Rs put the legal favor solidly where it should be — in the hands of the residents who have poured their money and energy into their neighborhood. For her, that is the bottom line.

“Ward 6 is a big development community,” she says. “If someone wants to come to me with a golf community, you bet your dollar that the paperwork is going to be steadfast on the legalities and that HOA will own that golf course and the owners will have a say.”